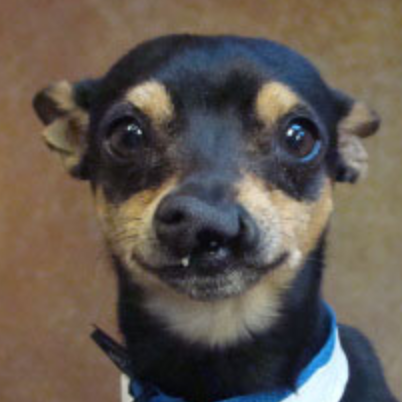 A Small Furry Prayer: Dog Rescue and the Meaning of Life 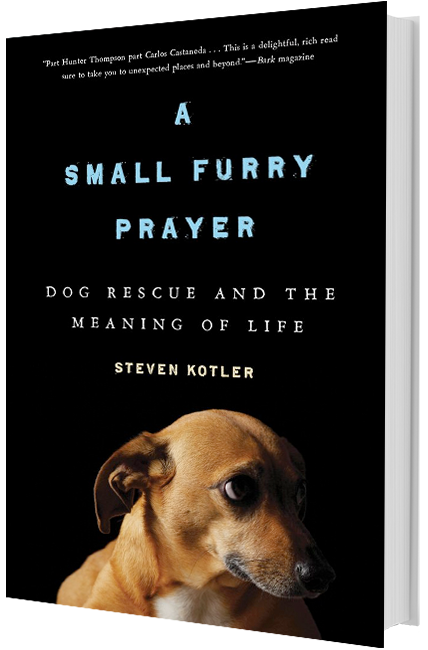 Steven Kotler was forty years old and facing an existential crisis—which made him not too different from just about every other middle-aged guy in Los Angeles. Then he met Joy, a woman devoted to the cause of canine rescue. “Love me, love my dogs” was her rule, and not having any better ideas, Steven took it to heart. Together with their pack of eight dogs—then fifteen dogs, then twenty-five dogs, then, well, they lost count—Steven and Joy bought a tiny farm in a tiny town in rural New Mexico and started the Rancho de Chihuahua, a sanctuary for dogs with special needs.

While dog rescue is one of the largest underground movements in America, it is also one of the least understood. This insider look at the cult and culture o dog rescue begins with Kotler’s personal experience working with an ever-peculiar pack of dogs and becomes a much deeper investigation into exactly what it means to devote one’s life to the furry and the four-legged.

Along the way, Kotler combs through every aspect of canine-human relations, from man’s long history with dogs through brand-new research into the neuroscience of canine companionship, in the end discovering why living in a world of dogs may be the best way to uncover the truth about what it really means to be human.

What People Are Saying About A Small Furry Prayer

“Joyous… Brimming with humor, gratitude, and grace, this is a remarkable story.”
—Publishers Weekly, starred review

“Part Hunter Thompson, part Carlos Castaneda, but mostly so original that it’s difficult to peg…This is a delightful, rich read sure to take you to unexpected places and beyond.”
—Bark magazine, Editor’s Lit Pick

“With nods to psychological and ethological research, Kotler describes his surprising sojourn to a houseful of mangy pups and the power of animal bonds, positing that our canine connections tell us about human nature… Kotler’s tale—part obsession, part inquiry, part adventure—serves up a well-rounded meal of soul-searching and psychology.”
—Psychology Today

“As he recounts their life in Chimayo (the pack at times approaches 50, all entertainingly delineated), Kotler seamlessly blends a history of Chimayo, a well-articulated understanding of how humans and dogs coevolved, and background on animal welfare efforts in this country with his witty, sharp-edged, and rewarding reflections on life. Kotler defiantly proclaims his love of Chihuahuas (he’s hilarious), then shatters our hearts and ends by laying down a real ethical challenge. Highly recommended not only for dog lovers but for readers of memoir, biology, and anthropology and seekers generally.”
—Library Journal, starred review

“Kotler offers a touching account of Chihuahua adventures alongside interesting blurbs on the history of pet ownership, canine ethology, the semantics of the dog-adoption process, homosexuality in nature and the intricate science behind canine domestication. A heartfelt example of humanitarianism at work.”
—Kirkus Reviews

“I read this compelling book for hours and found myself completely hooked as I am sure any reader who loves dogs will be. Steven Kotler captures something essential about dogs and humans in a way I have not seen anyone else do. With a hip, growling intensity, Small Furry Prayer is bound to inspire.”
—Jeffrey Moussaieff Masson, author of Dogs Never Lie About Love and When Elephants Weep

“Thousands of books have been written about dogs, thus it’s amazing and also very encouraging to find a book like this one, filled with original thought and plenty of new information. And if that’s not enough, it’s a great read, a real page turner. I strongly recommend it to anyone who has a dog, or has more than one dog, or who just likes to read a great book.”
—Elizabeth Marshall Thomas, author of The Hidden Life of Dogs

“A Small Furry Prayer is a wonderful read that’ll take you all over the place, pondering life in general, dogs and other awesome animals, spirituality, religion, flow experiences, and who you are in the grand scheme of things.”
—Marc Bekoff, author of The Emotional Lives of Animals, Wild Justice, and The Animal Manifesto

“Reading Kotler is like having a drink (or three, or five) with an old friend — only this friend is particularly interesting, more than willing to admit his faults and failures, has a sharp eye and an even sharper tongue, and has done loads of research… [Empathy] drives his earnest inquiries into a host of subjects ranging from spirituality and philosophy to neuroscience and deep ecology, all with the goal of understanding the ancient, complex and essential relationship between humans and other animals — especially dogs… There’s no sap here, but Kotler’s honest, heartfelt stories will have you laughing through your tears. This book is a must-read.”
—Mother Nature Network

“A thought-provoking inquiry… Are dogs special? Are humans? Or are we just special to each other because we care for them and they for us? Read this book, slowly, and decide for yourself”
—New Mexico Magazine

“Science, history, and a smattering of politics is interspersed with the continuing story of the shelter, its humans, the dogs and the occasional wildcat and coyote… It’s obvious that Steven Kotler is not only a very competent writer, he is quite an educated person. Dare I say brilliant? Anyone who is interested in the human-animal connection, the bond that we feel with our dogs, will find this book fascinating. It’s almost a guarantee that you will look at your dog in a totally different way.”
—Examiner.com

“A beautiful, deep encounter with the world of animal rescue on both a grand and personal scale… A Small Furry Prayer is not only for dog lovers, but for everyone who cherishes life and enjoys a good adventure. It’s delightful, funny, profound, sad, eye-opening and powerful. It’s about discovering what it means to be human.”
—Guideposts.org

“Part memoir and part philosophical study of the dog-human relationship… Reflecting on the writings of mystics, philosophers, and animal scientists as varied as St. Francis, René Descartes, Claude Levi-Strauss, and Elizabeth Hess, Kotler elevates this tale about saving dogs to a story about human stewardship of life.”
—Booklist 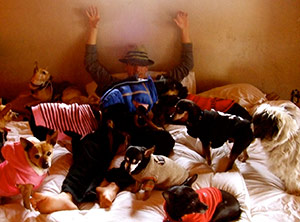 Steven Kotler is an author, journalist and co-founder of the Rancho de Chihuahua dog sanctuary. His award-winning books include the non-fiction works “A Small Furry Prayer” and “West of Jesus” and the novel “The Angle Quickest for Flight.” His articles have appeared in over 50 publications, including The New York Times Magazine, Wired, GQ, Outside, Popular Science, Men’s Journal, and Details. He also writes “The Playing Field,” a blog about the science of sport and culture for PsychologyToday.com. He lives in New Mexico with his wife, the author Joy Nicholso